A substantial amount of policy and legislation adopted by the European Union (EU) has an impact on or needs to be implemented at the regional level. However, this legislative process is largely reserved to the European Commission, the European Parliament, and the Council of the European Union. What is the role of the parties concerned, the regional political actors? Are they just spectators or co-designers of European politics? What role would they like to have in a newly constituted Europe?

The project focuses on the following research questions in order to examine the work of regional parliaments and assemblies in the European context: Which levers are available to regions to assert their legitimate interests in the European context? Which instruments and channels of influence are used by which regions – and with what success? What role do regional parliaments and assemblies play? How do they perceive this role? And what role do they want to play? How can regional, national and European politics work together more seamlessly?

Based on a comparative approach, the empirical design includes both traditional social science methods of data collection and analysis as well as a series of workshops with members of regional parliaments (interventions) in which the future of the EU is discussed from a regional perspective. Our study comprises 15 regions in seven EU member states, systematically selected according to a priori defined criteria taking into account variation in institutional, political and socio-economic conditions. 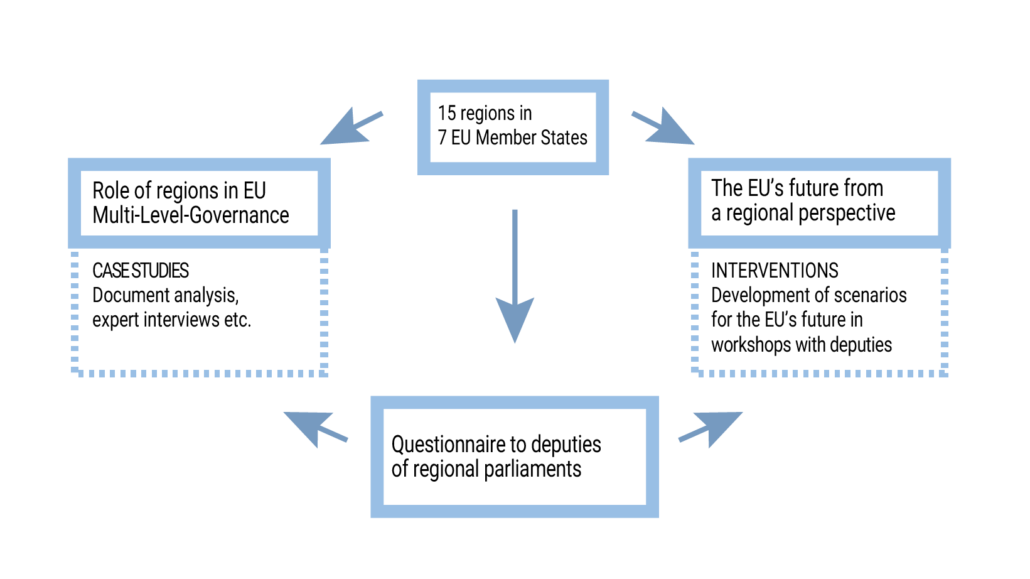 As a participatory research project, REGIOPARL broadens its analytical approach towards actively engaging with political actors at the regional level. These actors are often viewed as crucial players for democratic participation as well as the proper functioning of effective representation and problem-solving. Given their proximity to citizens, regional actors can act as a linkage between citizens on the one hand and political decision-makers at the national and European level on the other. Regions hence are important political spaces contributing to the political identification with and the legitimacy of a polity—as such they become potential bearers of European democracy.

REGIOPARL attaches great importance to the transfer of knowledge between academia, politics, and society. In addition to scientific publications, we will therefore actively disseminate our research findings to institutions and decision-makers at the regional, national and European level as well as to the interested public. By doing so, the project also aims at contributing to the ongoing networking activities of and between regional parliaments in Europe. Dissemination activities are not limited to the presentation of the final results but will accompany the entire research process through targeted media and public relations work.

On our blog, the REGIOPARL team regularly informs about our field research and comments on current topics concerning the role of the regions in Europe.

Besides the research conducted by REGIOPARL’s core team, the partner universities in the joint research network are working on other relevant questions concerning the role of regions in Europe. This includes, amongst others, the interplay between austerity politics, regional inequalities and redistribution mechanisms, which is being investigated by Moritz Neujeffski as part of a PhD project at the Berlin Social Science Centre (WZB): What role do regional compensation programmes play in times of financial crises, and how has austerity politics affected regions? Can instruments of regional redistribution instruments secure the scope of action of individual regions even in times of crisis?

Regular updates on the activities of the research network can be found on the REGIOPARL blog.