Since the end of the second World War, there has been a trend of regionalisation in Europe.[1] Regions have acquired more competences and regional representatives are increasingly elected instead of appointed. In parallel, European integration has led to a multiplication of avenues for regions to engage in European politics, via transnational networks, domestic arenas, or directly in Brussels.[2] This general trend notwithstanding, Europe’s regions are very diverse regarding their institutions, political authority, and their role in EU affairs. The European Regional Democracy Map (ERDM) visualises this diversity, allowing a range of users to explore the political variety of regions across the continent and access an array of original data sets. Launched in May 2022, the ERDM website seeks to become an evolving hub for reliable information and original data on the institutions and politics of regional democracy in Europe.

A reliable, up-to-date, and accessible platform

The idea of the ERDM originated in a somewhat frustrated discussion in the summer of 2020. Planning the next phase of our research project on the role of regional parliaments in the EU, we encountered a range of information gaps that at first seemed merely bothersome. Surely, one could find out rather quickly whether French regional assemblies have EU affairs committees, how often citizens in Tuscany and those in Wallonia vote in regional elections, and how their regional governments are elected. In our digital age and the context of a politically interconnected Europe, we don’t expect such basic information difficult to find. The ERDM can be understood as a solution to the problems that emerged in our discussion. For while indeed such information can in principle be “found”, the search was often laborious, the data hard to verify, outdated, or inaccessible.

These are not merely issues for the social scientist in designing and conducting research. They bear on broader questions regarding how we provide and communicate information on a set of relatively specific political and institutional dynamics that is both up-to-date and reliable. Tools such as Wikipedia and online translators have greatly democratized knowledge.[3] Basic figures on the population size of Hamburg or the GDP of Finland are a click away. But when it comes to the functioning of the Thessalian government, things get more complicated. Most of all, however, Encyclopaedias and other open platforms rely on primary sources; Wikipedia’s “no original research” doctrine states that any factual claim on the website must be “able to cite reliable, published sources that are directly related to the topic”.[4]

Published, academic sources are also our natural starting point in researching particular aspects of regional democracy in Europe. In contrast to economic and financial indicators or the functioning of big, prestigious institutions, there is no central, authoritative source on regional institutions and politics. Big academic projects such as the Regional Authority Index are highly informative but have a relatively specific research focus after all.[5] The same goes for the focus of most country (case) studies and even handbook articles, which provide only partial overviews of basic facts and institutional developments.[6] More general overviews are commissioned by organisations such as the European Committee of the Regions (CoR).[7] These, however, are quickly outdated when hundreds of regions in 27 member states adopt to both domestic as well as transnational developments – such as EU legislation and funding. Another issue regards the transparency of research: digging into the details of assumptions about regional institutions sent us off into a cluster of secondary literature missing primary sources such as constitutional texts, decisions, or rules of procedure.

Collecting data rigorously and from primary sources takes time and resources. These expenditures weigh on the accessibility and up-to-dateness of data. Researchers need to publish from data sets, thus making them open-access strategically and over time, if at all. To be sure, standards of publishing increasingly require academics to make their data openly available so that others can better scrutinise and connect to their work. Dataverses and open-data platforms are a laudable development. Yet they are often difficult to access and handle for non-experts, including policy makers and political advisors.

Reflecting on these problems and our own information needs, we imagined that an ideal platform would be accessible and user-friendly, dynamically updated, and provide sustainably reliable information and original data. The ERDM seeks to live up to this ideal. It wants to provide detailed, complete, and recent data on the institutions and politics of regional democracy in Europe on an open, digital platform. The design of the ERDM accommodates a wide spectrum of users, from academic researchers to policy analysts and interested citizens. A responsive online map invites exploring data across countries; rich visualisations show the dimensions, differences, and commonalities between regions; regional profiles integrate information for each region included in our data set; an extensive research section provides open-access data, code books and further academic sources.

The ERDM is a collaboration between REGIOPARL, located at Danube University Krems, and the research team around Arjan Schakel at the University of Bergen, who provides many of the original data sets. The data on the ERDM can be grouped into four broad categories: regional election results, regional election systems, regional executive government, as well as the involvement of regions in EU affairs. As Europe’s regions are diverse, so is the data that users can visualize and investigate on the ERDM. From electoral turnout and vote shares of EU party groups to ballot form, the relation of executive and legislature, or the institutional background of CoR representatives. Much effort has gone into developing a web-design that allows users to navigate this array of data and understand the concepts and the research underlying it. In partnership with the Berlin-based companies Goldland and InfografikPro, we created a powerful platform that is, in all modesty, unparalleled in this field.

Some years before the iPhone taught us to pinch and zoom, Google Maps introduced most of the world to navigating geospatial data on a digital screen. At the heart of the ERDM is an interactive online map: continuous zoom, pop-up information, and intuitive click-paths make it easy for users to navigate through Europe’s countries and regions. They can select from a variety of variables to be visualized directly on the map; comparing regions and variables – both individually or combined – allows users to explore patterns across and contrasts between regions. Data visualisations are dynamic and adjust according to the form and the complexity of the variables selected. 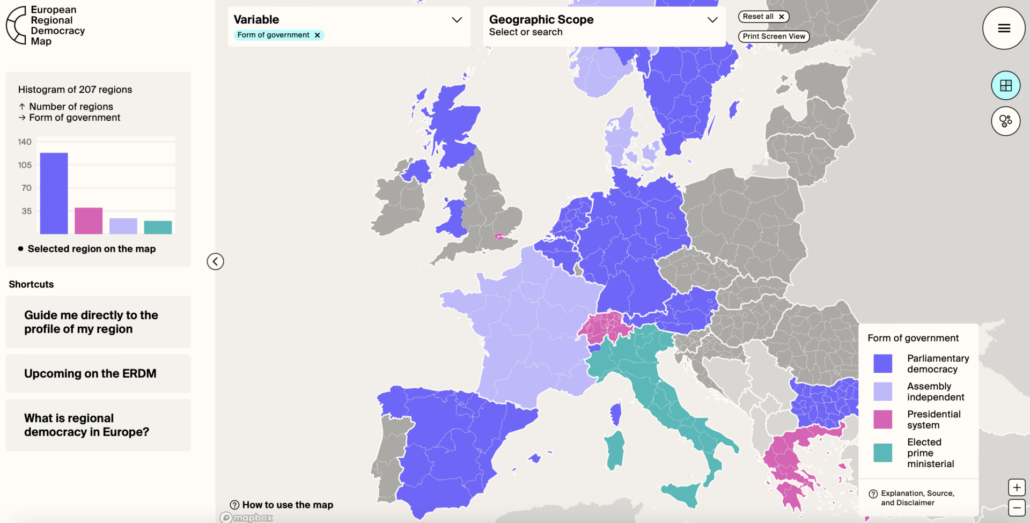 Every region included on the ERDM has a string of data attached to it. Individual, regional profiles provide a detailed and integrated overview of all data available for each region respectively. Sorted according to the four main sets of information of the ERDM, the regional profiles feature different visualisations that allow users to grasp significant data points quickly; diagrams and tables can be great illustrations in reports and presentations. 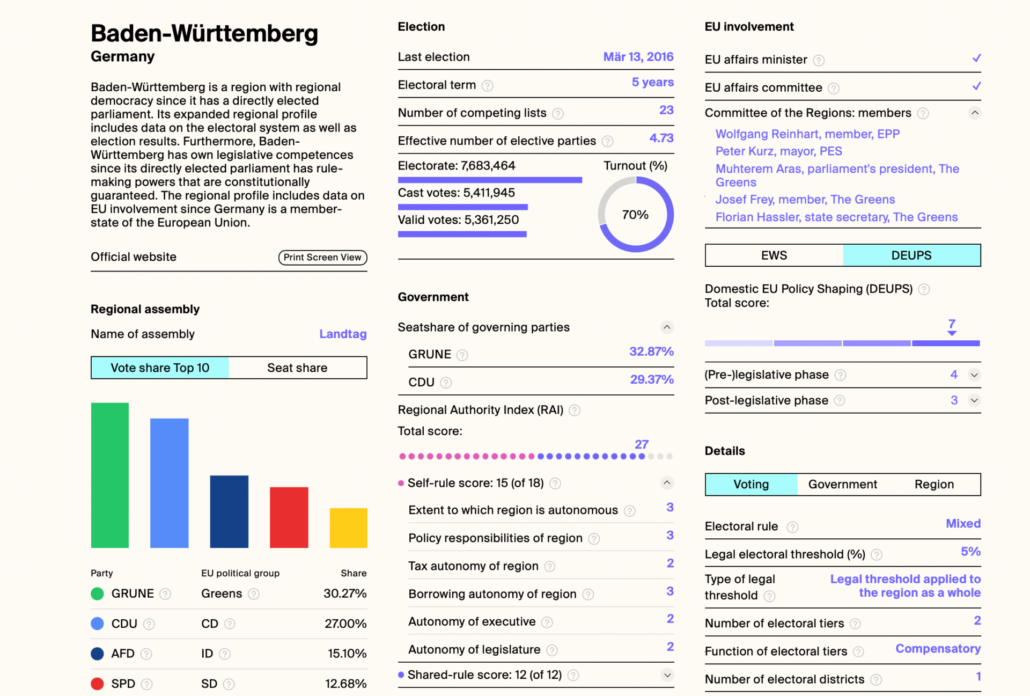 A primary concern of the project – that goes beyond usability – is to make it easy for users to get a deeper understanding of the data and the research behind it. They should not need to open a new tab and search for the meaning of a concept such as ‘transferable vote’ or ‘Early Warning System’. Short explanations can be quickly displayed above every variable while comprehensive explanations as well as data sources are just a click away. In terms of transparency, a separate research section outlines the data collection processes, illustrates approaches to coding, and makes full code-books available for download. Links to original publications and further academic research invite users to explore the many pertinent questions relating to the role and future of regional democracy in Europe.

Living up to the ideal of a one-stop-shop for information and data on regional democracy, the ERDM also seeks to make all of the underlying, original data open-access. Where funding arrangements and publication goals allow for it, data sets are – or will soon be – available for direct download to be used by the research community and policy analysts.

The future of the ERDM

The ERDM just went live and is in its first release stage. We are, above all, excited about its potential. The basic construct of the website – programmed in DrupalTM – is flexible and can be expanded to include more and different types of data and visualisations. The near future of the ERDM should bring two major updates. First, an update to include the regions from Central and Eastern European countries: Poland, the Czech Republic, Slovakia, Hungary, Slovenia, Croatia, Romania, and Bulgaria will all be fully integrated in the ERDM data base before the end of next year. Second, when dynamic data is being updated (for example, on election results or regional engagement with the Early Warning System of subsidiarity control), we seek to capture changes and developments by incorporating time-series data on the ERDM.

In the mid-term, the success of the ERDM will depend on upholding the ideals that emerged from our discussion in the summer of 2020. Adding functionality and more data should not come at the expense of user-friendliness while the quality of the data and the transparency of the underlying research processes mustn’t fall behind. Most of all, however, the ERDM will need to spark interest both among academics, public officials, as well as political actors in order to be sustainable. We hope that colleagues will find that they can use and add to the ERDM; analysts can illustrate their arguments with the appealing technology of the ERDM and researchers may share new data sets on the platform.

[6] Compare: Committee of the Regions 2013, The Role of Regional Parliaments in the Process of Subsidiarity Analysis within the Early Warning System of the Lisbon Treaty (Brussels: European Union): https://cor.europa.eu/en/engage/studies/Documents/Role-Regional-Parliaments-in%20Process-of-Subsidiarity-Analysis-within-Early-Warning-System-of-Lisbon-Treaty/EN.pdf