After Ursula von der Leyen presented the Conference on the Future of Europe (CoFoE) as one of her political priorities in June 2019, the idea of a two-year consultation process with citizens quickly gained traction in Brussels. EU institutions and various stakeholders in the European capital discussed the initiative intensively throughout the last year. Even though the Conference is set to become a decentralized initiative with a strong focus on national and regional elements, the current centre of gravity is nevertheless Brussels, where European institutions are negotiating a Joint Declaration which will outline the process, concept, structure, timing and scope of the initiative.

But what is the mood in Brussels towards the Conference and what do stakeholders expect of its process, content and outcome? How should citizens be involved in the initiative? What should be discussed and what should be the outcome of the exercise?

To find answers to these questions, the European Policy Centre (EPC), the European Office of the Konrad-Adenauer-Stiftung and ifok conducted a survey on Brussels’ perspective on the future of Europe after COVID-19 between July and August (KAS/EPC/ifok, 2020). The online survey reached more than 220 respondents and was complemented by 20 interviews with key stakeholders in Brussels. Participants included EU institutions, think tanks, NGOs, diplomats, business representatives and journalists.

The report concludes that, in general, Brussels stakeholders have “high hopes, but low expectations” towards the post-COVID-19 EU. Whereas they “dream big for the Union’s future (…), their ambitions are mitigated by a healthy dose of realism” (KAS/EPC/ifok, 2020) concerning what will be possible to achieve after all. This perception is especially the case for Brussels’ expectations towards the CoFoE.

Brussels stakeholders indeed have high expectations towards the CoFoE. A relative majority (42%) of respondents even assesses that the Conference should be a priority of the German Council Presidency. Weighted against other issues, however, especially those related to the mitigation of the pandemic, the Conference is seen less of a priority: issues such as the Multiannual Financial Framework or the Recovery Plan, Brexit or other areas which require an immediate response to the COVID-19 crisis seem to have a clear priority over the Conference, which is seen as important, but not urgent.

With respect to the CoFoE process, Brussels stakeholders emphasize the importance of meaningful citizens’ involvement in the process. At the same time, however, they hold that representatives of European and national institutions should play an important role as well. Therefore, in the opinion of the Brussels community, the outcome of the Conference should be determined by both citizens and representatives jointly and on equal footing.

Regarding what should be on the Conference’s agenda, Brussels clearly identified the European Green Deal as the key issues to be discussed during the two-year process. Digitalisation, however, surprisingly ranks low on the stakeholders’ priority list. Instead, democratic and institutional reforms and values and fundamental rights follow the Green Deal on the list of highest-ranking issues, followed by economic topics. 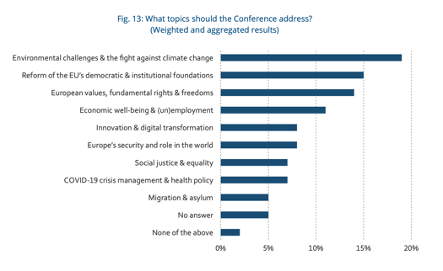 It is surprising in the context of the present pandemic, however, that for Brussels stakeholders, COVID-19 management and health policy rank relatively low among the priorities for the Conference. Instead, they have in mind a much “broader focus, concentrating first and foremost on longer-term topics of strategic relevance” (KAS/EPC/ifok, 2020).

While being certain about the topics to be discussed, the survey shows that there is still no clear picture concerning the concrete objective of the Conference. Brussels is split between those who see the CoFoE as a means to progress policy debates which then have an impact on EU policymaking, leading to meaningful involvement of citizens into the big policy decisions of our time and those who rather see it as a communication exercise. The latter sees the best outcome of the Conference as a successful awareness-raising activity, which shows citizens the value of European cooperation. 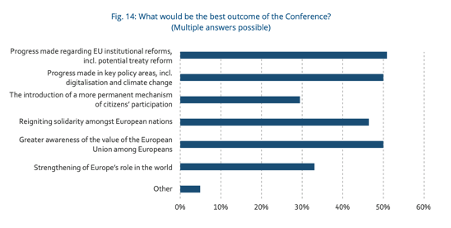 This will be one of the most urgent issues to be clarified by the Joint Declaration. Starting the Conference process without a clear vision of what should come out of it will inevitably lead to diverging expectations among different groups, which are impossible to meet at a later stage. Clear expectation management is therefore key from the initiative’s start: will the CoFoE be a means to find a new consensus on policy debates with the help of EU citizens? Or will it rather be a communication exercise that promotes the value of European cooperation among its citizens? Clearly, if designed well, it can be both but without a clear picture of what is on the table, to what extent citizens will be involved in those decisions and what should be the outcome of the initiative, it will inevitably fail to meet expectations and thus backfire and erode the trust of citizens in EU decision-making and representatives even further.

According to the survey, this includes a recalibration of institutional competences as such, especially a reinforcement of the role of the European Parliament, but also adjustment of the treaties in certain policy areas. Thirdly, a lack of effective crisis management is another prominent issue why institutional reform is seen as necessary: “Although not very old, these treaties do not allow EU institutions to react to crises quickly”, one interviewee pointed out (KAS/EPC/ifok, 2020).

For this reason, nearly two thirds of respondents think that the Conference should be open for treaty change. A discussion on democratic reform and even on policy reforms cannot be held meaningfully and truly open, if treaty change is excluded from the start.

Yet, the Brussels community does not see treaty change as an end in itself, but as “the outcome of an open discussion and objective assessment of the current deficits of the EU’s current institutional and legal set-up” (KAS/EPC/ifok, 2020).

However, the Brussels community’s views on the Conference are met by a considerable dose of realism. Whereas respondents are generally open to treaty reform in the context of the Conference, they doubt that member states would agree to substantial reforms of the current EU Treaties. Also more generally, when asked about the potential outcome of the CoFoE, Brussels-based stakeholders doubt that the initiative will produce meaningful results in the end. However, it needs to be noted that 42% of respondents are still undecided on this matter, a significant number which is also related to the many uncertainties that still surround the Conference. At the current stage, as EU institutions are still negotiating a Joint Declaration, it is simply unclear to many whether the CoFoE can become a meaningful exercise.

So far, however, Brussels stakeholders are seemingly not yet convinced about what they see evolving. EU institutions, therefore, need to get the Joint Declaration right to make the Conference a success. And getting things right especially relates to some of the points raised by the Brussels community. More explicitly three questions need to be answered by the Joint Declaration:

As high as the hopes of the Brussels community for the CoFoE are, stakeholders are still sceptical about whether the process can become a meaningful exercise. It is therefore up to EU institutions to reassure the community and EU citizens at large in the Joint Declaration by setting out clear objectives, structures, content and follow up.

Greubel, Johannes / Stratulat, Corina, 2020: “Preparing for the Conference on the Future of Europe: The ‘known knowns’ of citizens’ participation”, available online: https://www.epc.eu/en/publications/Preparing-for-the-Conference-o~2fb4e4