All of the United Kingdom (UK) suffers, but “Leave” regions suffer more

The inescapable reality of Brexit in both of its forms, hard or soft, will have far-reaching welfare consequences for all European regions. This is the conclusion of a study conducted by the Bertelsmann Stiftung quantifying the welfare effects, measured as changes in income, as a consequence of trade frictions arising out of Brexit.

Unsurprisingly, the most affected country will be the UK, which would lose 873 euros per capita translated into 57 billion euros of aggregate welfare for a hard Brexit. A soft Brexit would severely mitigate the welfare effects leading to losses of 491 euros per capita and an aggregate amount of 32 billion euros. The Brexit would also translate into an exodus of around 750,000 and 400,000 people for a hard and soft Brexit respectively.

At a regional level, the findings are more heterogeneous. Regions closer to the rest of the continent would suffer the highest welfare losses, being East Anglia (2.54% loss), Kent (2.53% loss) and Essex (2.48% loss) at the top when measured in relative terms. The smaller and more economically productive regions lose more than larger and less productive ones, as the example of London proves, where a hard Brexit would entail a loss of 1,700 euros per capita in absolute terms. In relative comparative light, however, London is the region with the smallest percentage loss (1,66%) as it holds the highest GDP per capita UK wide. These results could be regarded as surprising, as London is the region in England with the highest percentage Remain vote (59,9%) and would still suffer the lowest relative welfare loss. The three most damaged regions by a hard Brexit scenario voted to leave the European Union (EU), adding to the dramatic irony of Brexit: those who enacted it will pay the highest price.

While Europe suffers, the rest of the world profits 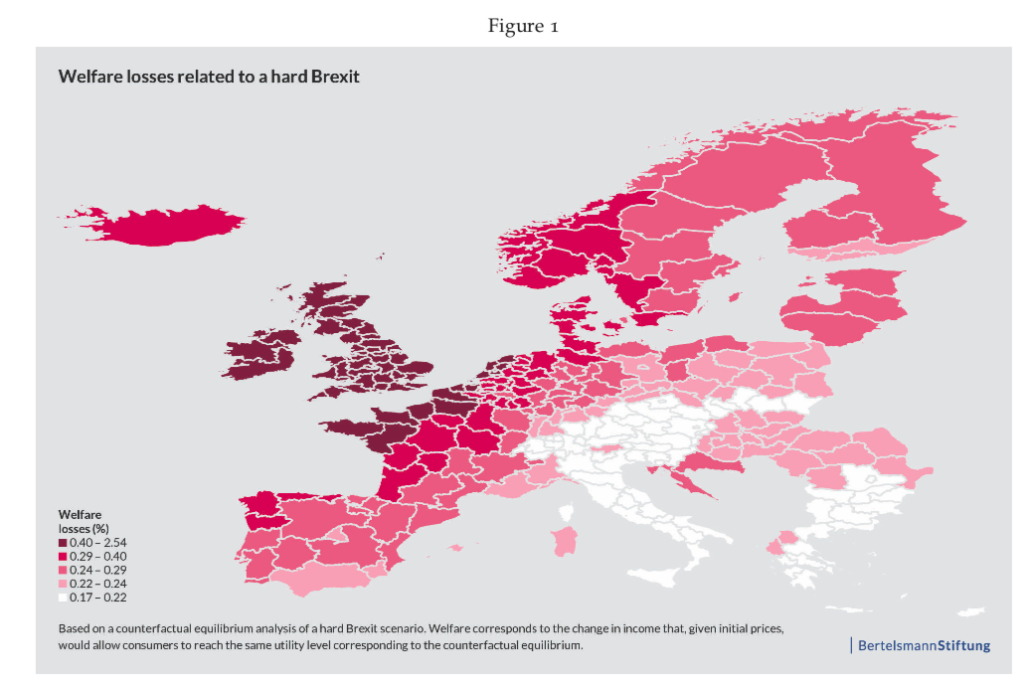 Image taken from: Estimating the impact of Brexit on European countries and regions, 2019 (Bertelsmann Stiftung)

With regard to the effect of a hard Brexit on the rest of Europe, geographical proximity correlates with higher welfare losses (see Figure 1). The closer a region to the UK, the higher the negative economic impact of Brexit. In the specific case of Germany, Schleswig Holstein would lose the most welfare in relative terms (0.3%), followed by densely populated regions in Nordrhein Westfalen such as areas around Cologne and Düsseldorf. In terms of aggregate welfare losses, Germany and France would lose amounts of 9,5 billion and 6 billion euros each year respectively.

There are not only losers arising from Brexit. The disruption of European value chains, leading to increased prices, would benefit other world regions. As an example, US and Chinese welfare could rise by around 13 and 5 billion euros a year respectively as a result of a hard Brexit. Regarded from any standpoint, one observation seems clear: Europe will surely lose. The extent of the impact depends on trade volumes and geographical closeness to the EU, but every single European region will endure welfare losses.